This is What So Called Christianity Does To People 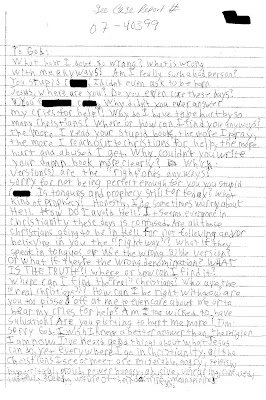 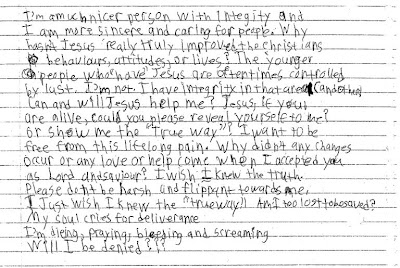 DENVER -- Sometime before his deadly rampage at the New Life Church in Colorado Springs, gunman Matthew Murray penned a letter addressed to God in which he poured out his frustration and confusion over his faith and ranted about the hypocrisy of Christians.
Colorado Springs police discovered the letter in Murray's 1992 Toyota Camry, which was found parked outside the New Life Church on the day of the shootings. CALL7 Investigators obtained a copy of the letter on Wednesday, hours after Colorado Springs police released its official 450-plus page report on the shootings.

The expletive-laced letter addressed "To God" begins, "What have I done so wrong? What is wrong with me anyways? Am I really such a bad person?"
The one and half page later is primarily Murray asking questions of God.
"I didn't even ask to be born. Jesus, where are you? Do you even care these days ?... Why didn't you ever answer my cries for help? Why do I have to be hurt by so many Christians?" he asked.
In several sentences, Murray spews insults at God, using an epithet for female anatomy, and asks, "Why couldn't you write your damn book more clearly?
"The more I read your stupid book, the more I pray, the more I reach out to Christians for help the more hurt and abused I get," he wrote.
"I've heard good things about what Jesus can do, yet everywhere I go in Christianity, all the Christians I see or meet are miserable, angry, selfish, hypocritical, proud, power hungry, abusive, uncaring, confused, lustful, greedy, unsure of their doctrine and mean-spirited ... Am I too lost to be saved? My soul cries for deliverance. I'm dieing (sp), praying, bleeding and screaming. Will I be denied???"
On Dec. 9, 2007, Murray shot and killed two people at the Youth With A Mission Center in Arvada then hours later went to Colorado Springs and opened fire at the New Life Church, killing two more people. Murray was shot several times by a security guard before he aimed a gun at his head and killed himself.
It's obvious he worried about the ever-after but didn't write anything about his intentions to kill himself.
"Honestly, I do sometimes worry about hell. How do I avoid hell? It seems everyone in Christianity these days are confused. ... What is the truth? Where can I find it? Where can I find the real 'Christians?' ... Are you too pissed off at me to even care about me or to hear my cries for help? Am I too wicked to have Salvation? Are you planning to hurt me more?"
He pointed out the hypocrisy in Christians and tried to set himself in a positive light in God's eyes.
"I'm a much nicer person with integity (sp) and I am more sincere and caring for people ... The younger people who 'have' Jesus are oftentimes controlled by lust. I'm not," he wrote. "I want to be free from this lifelong pain. Why didn't any changes occur or any love or help come when I accepted you as Lord and Savior?"
http://www.thedenverchannel.com/news/15576902/detail.html#

This is EXACTLY what I've been talking about FOR YEARS. SO CALLED CHRISTIANITY IS A LIE. Make sure you understand this, THE ENEMY COMES TO KILL, STEAL AND DESTROY-CHURCHIANITY DOES TOO, WHAT DOES THAT TELL YOU? This man was looking for answers in christianity, and look what churchianity showed him. This so called church that he went to was one of thousands of "mega churches" that dot the landscape. This man found NO LOVE, NO PEACE, NO POWER, NO STRENGTH there. I am furious, not with this man, but with the LIARS CHURCH, APOSTIANITY, SO CALLED CHRISTIANITY. YOU PASTORS HAVE BLOOD ON YOUR HANDS, YOU ARE MERCHANTS OF DEATH, YOU ARE THIEVES, YOU ARE KILLERS, YOU ARE DESTROYERS OF MEN. And.....the Lord will deal with you according to your treachery. If things like this do not make your blood boil, then you don't know the Jesus written about in the bible. This man went farther than most, but THOUSANDS UPON THOUSANDS are having the same experience as him in apostianity. Time is short, get out of the babylonian lie masquerading as christianity today brothers. It is wicked beyond comprehension. Grace and Peace
Posted by Brother D at 7:24 PM