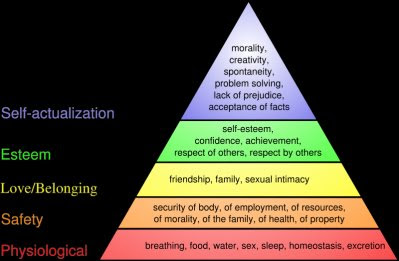 Psalm 4
4 Tremble ye, and do not sin;' Say ye thus in your heart on your bed, And be ye silent. Selah.

8 In peace together I lie down and sleep, For Thou, O Jehovah, alone, In confidence dost cause me to dwell!

The Psalm says "tremble ye, and do not sin"....Tremble? Yes, tremble, why did the Holy Spirit use that word? There's a reason this idea of "fear of the Lord" is in the bible. Men should not fear those who can kill the body, but they should fear him who can throw both body and soul into hell. These days, with the world falling down around our heads, people are looking for safety and security. Remember maslow's hierarchy of needs? It's right there at the top, and safety is one of those needs right above eating and sleeping, which is why is such a powerful tool for control of the masses. The thing is, the Lord said that he would be the one who could cause you to dwell in safety. He is our source for everything. We as believers are sons of God, we eat at the kings table, which means we play by the kings rules. One of the top rules is DO NOT SIN.

The Lord has an interesting way of bringing things to my attention. I ask questions all the time and sometimes it takes the Lord quite awhile to answer them. He answers when it pleases him to answer, anyhow, pertaining to this question of WHY so few will be saved (MAtt 7:14) he point this out to me:

7:14 how strait is the gate, and compressed the way that is leading to the life, and few are those finding it!

7:21 'Not every one who is saying to me Lord, lord, shall come into the reign of the heavens; but he who is doing the will of my Father who is in the heavens

7 verses after Jesus telling us to seek, and knock, he tells us how few will be those who find the way of life, then 7 verses later he tells us about those who call him "Lord" but won't be admitted to the kingdom. He brings to my attention a question to answer a question...what are people "seeking" for? Which doors are people "knocking" on? The answer to these questions will shed light on why few will make it through the narrow gate and why the many who call him "Lord" won't be granted entrance to the kingdom.

When men seek other men for their safety and security, but do not seek the Lord's face in prayer, do you think that pleases the Lord? When men are knocking on every worldly door they can find, but they fail to knock on Jesus' door, do you think that pleases the Lord? Men's first choice over and over again is to seek the world, a great example was this past presidential (s)election, where all the so called christians pandered for McBush to win so he could save America? Obama may be the anti-christ but McBush was any better? Bush basically destroyed America over the past 8 years and the same so called christians clamored to get another guy in the white house who is just like him? My point is not which of the crooks got elected, my point is that so called christianity seeks the world to save them. Instead of working for a kingdom that is not of this world, they belong to the kingdoms of this world. We live in the world but we are not of the world, they just don't get it. Seek and you will find. Todays so called church seeks the world and finds the world and look where we have arrived? This place is a royal mess, and the blame for it lays squarely at the feet of so called christianity. If they were "salt" the world would'nt be rotting right now. If they were "light" the world would'nt be so dark right now. As things stand the world is rotting and dark, which is all the evidence you need to know that so called christianity today is a fraud. They are a business willing to service (weekly) you for a fee(tithe), setup by their tax-exempt CEO's called "pastors."

When you understand that only few will be saved, it should alarm you. It should cause you to search the face of God to determine why such a tragedy will take place. It should motivate you to use all your strength to not let that happen to you. A warning before tragedy takes place is a gift of life, unfortunately many people just see it as criticism and continue on their broad path journey to the wide gate that leads to destruction. The feel that since they are with the "herd" of many people on this broad path, they must be in the right place. Most people must be right when they all believe and do the same things, and small groups outside the mainstream must be wrong because there are only a few of them, or so they think. One day the people who think this way will be in for a rude awakening. The world they sought comfort from sold them down the river. The God of creation has been waiting and watching with his grace extended for anyone and everyone who will accept it. It appears today that not many are "seeking" or "knocking" on his door.

Remember, everything called Jesus is not the real Jesus. Everything called "christian" is not true christian. Prayers to "a" god are not prayers to THE God. This world is full of frauds, full of lies, and full of deceit. Satan is no dummy. He is the master of sending souls to hell, and those who do not love the truth enough to sell out for it will most likely be deceived. Time is short, I don't see any of this as rocket science. How hard is this command to understand: "Do not sin" Not rocket science to understand, you don't need some crackerjack box theology degree to figure it out, you don't need some hireling pastor to help you understand it. You need the Holy Spirit to DO it, which means you need to be "in Christ." A weak church will be kept from the hour of tempation thats coming on the whole world to test it (rev 3:10). An escape is coming for those who are found worthy of it (luke 21:36).

If you think that people who "sin all the time" will be counted worthy of the rapture, well, I guess you will find out soon whether you are right or not.....Sin must be rooted out and kept out, just like you must get "in Christ" and REMAIN "in Christ."

It's easy to "get married" but not so easy to "remain married" right? Just like its easy to accept the grace offered through faith to enter into Christ, but not so easy to remain "in Christ." Does that jive with what we're told in Matt 7:14 that only a few will be saved, and Matt 7:21 where many who call him Lord will be told "away from me you evildoers, I never knew you?" Yea, it does, fits like a glove.

I don't care about being "right" as much as I care about your soul not being in hell. Be not deceived. grace and peace