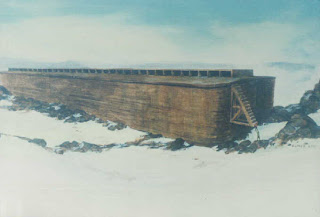 The bible is very clear regarding what's about to happen. I know there are many people in the world who either 1. don't believe a rapture is going to happen at all or 2. don't believe it will be pre-tribulation. Regardless what they believe, we know what's coming. Let's take a look at what the bible says:

You don't need any phony seminary degree to figure out what the bible is saying here. What's coming is going to happen JUST LIKE THE DAYS OF NOAH. Well, just like the days of Noah is going to upset ALOT of so called churchianity. Why? What do we know about the days of Noah?

3. If you are righteous, like Noah, your house gets saved-Genesis 7:1 And the LORD said unto Noah, Come thou and all thy house into the ark; for thee have I seen righteous before me in this generation.
Genesis 7:4 For yet seven days, and I will cause it to rain upon the earth forty days and forty nights; and every living substance that I have made will I destroy from off the face of the earth. Genesis 7:5 And Noah did according unto all that the LORD commanded him.

4. After we enter our "ark" just like Noah, what happens? Genesis 7:13 In the selfsame day entered Noah, and Shem, and Ham, and Japheth, the sons of Noah, and Noah's wife, and the three wives of his sons with them, into the ark; ... Genesis 7:16 And they that went in, went in male and female of all flesh, as God had commanded him: and the LORD shut him in.

The righteous go into the ark, then the Lord shuts the door, just like it happened in Noah's day. Gosh that door shutting sounds awfully familiar, where have I seen that before? Oh yea:

Revelation 4:1 After this I looked, and, behold, a door was opened in heaven: and the first voice which I heard was as it were of a trumpet talking with me; which said, Come up hither, and I will shew thee things which must be hereafter.

Matthew 25 :1 'Then shall the reign of the heavens be likened to ten virgins, who, having taken their lamps, went forth to meet the bridegroom; 2 and five of them were prudent, and five foolish; 3 they who were foolish having taken their lamps, did not take with themselves oil; 4 and the prudent took oil in their vessels, with their lamps. 5 'And the bridegroom tarrying, they all nodded and were sleeping, 6 and in the middle of the night a cry was made, Lo, the bridegroom doth come; go ye forth to meet him. 7 'Then rose all those virgins, and trimmed their lamps, 8 and the foolish said to the prudent, Give us of your oil, because our lamps are going out; 9 and the prudent answered, saying -- Lest there may not be sufficient for us and you, go ye rather unto those selling, and buy for yourselves. 10 'And while they are going away to buy, the bridegroom came, and those ready went in with him to the marriage-feasts, and the door was shut; 11 and afterwards come also do the rest of the virgins, saying, Sir, sir, open to us; 12 and he answering said, Verily I say to you, I have not known you. 13 'Watch therefore, for ye have not known the day nor the hour in which the Son of Man doth come.

God told Noah to "come into" the ark, indicating that God was in the ark. (Genesis 7:1)

Rev 4:1 After these things I saw, and lo, a door opened in the heaven, and the first voice that I heard is as of a trumpet speaking with me, saying, 'Come up hither, and I will shew thee what it behoveth to come to pass after these things;


Here's something else to remember about what's coming. If the bible is true, and I believe it is, that as things were during Noah's day, so they will be for us, consider this:

Noah was physically separated from the wicked. The wicked remained where they were, NOAH WENT INTO THE ARK. So much for post-trib and pre-wrath arguments. If they were right, Noah would have been out treading water with the wicked during the flood. Also notice, the Ark floated ABOVE the waters. Wrath was below, Noah was above. So, for all those people who would say that there will be no pre-trib rapture, tell that to Noah, tell that to Jesus. We know what to expect. Physical separation from the wrath that's about to come. If it happened that way for Noah, we can expect it to happen that way for us. We can expect the event before us to take place just the way it did for Noah.

Noah went into an ark, we will go into something like an ark (place of safety)

Noah's family went into the ark, our family will go into the ark (i suspect you should pray for them before the 'flood' shows up)

Jesus promised us a pre-flood escape when he tells us that it will be for us, just as it was for Noah. He does'nt stop there. He also gives us:

Rev 3: 10 'Because thou didst keep the word of my endurance, I also will keep thee from the hour of the trial that is about to come upon all the world, to try those dwelling upon the earth.

Luke 21:36 watch ye, then, in every season, praying that ye may be accounted worthy to escape all these things that are about to come to pass, and to stand before the Son of Man.'

Noah was counted worthy to escape the flood in his day. Will you be counted worthy to escape the flood that's about to come on this world in our days? The post-trib and pre-wrath doctrines have been created by an enemy to steal, kill and destroy. Noah DID NOT get on the ark mid-flood, or post-flood THATS A FACT. Open your eyes before its too late.

grace and peace
Posted by Brother D at 3:27 AM