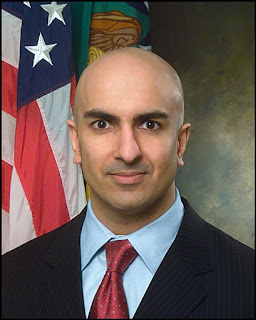 Neel Kashkari, Former Goldman Sachs Executive, To Head $700 Billion Bailout
Look at the eyes on this guy. Kashkari? Everything about this guy screams WRONG. All I'm doing here is making an observation.
As the joker said in batman...riddle me this:
I noticed that the elite owned media are hyping whats going on in the financial markets as a CRISIS. Now, they don't have to use that word, if they wanted to soothe people they could use calming words instead, but they are'nt. Why not? Why are'nt they trying to soothe peoples nerves? Because as they stoke peoples FEAR higher and higher, people will be ready for the answer..at just the right time. People are at a point that they'd sell their eternal soul for financial security. Well, I think they are going to have their chance to complete that transaction......soon. I saw this guys picture and name flash across the tv screen tonight and everything inside me said WRONG. Jesus started his pubic ministry around the age of 29-30, this guy is 35. I'm just watching. If the devil himself were to walk out on a stage somewhere RIGHT NOW and tell the world "yea, I'm the devil, but I can solve this financial mess for you. He'd be elected world dictator TODAY. http://www.huffingtonpost.com/2008/10/06/neel-kashkari-treasury-as_n_132265.html
http://www.usatoday.com/money/economy/2008-10-06-kashkari-rescue-bailout_N.htm
An anonymous and totally unsubstantiated?? HuffPo commenter says he's a right-wing woman-hater!
Really? A woman hater? How interesting...
Daniel 11:37 "He will show no regard for the gods of his fathers or for the desire of women,nor will he show regard for any other god; for he will magnify himself above..
http://gawker.com/5060145/neel-kashkari-americas-new-head-of-money
Who was Daniel talking about there? You know who. Just another observation. Watch and pray that you may be counted worthy of the escape thats coming Luke 21:36. Grace and peace
Posted by Brother D at 3:16 PM