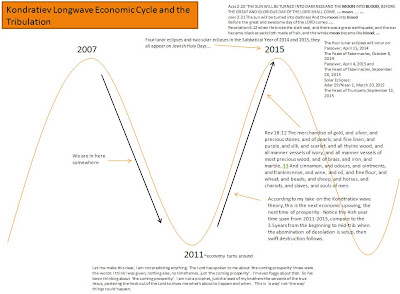 For whatever reason, the Lord has brought to my mind the idea of the coming prosperity. I'm not sure why that's been in my mind over the past week, but it has. The thing to understand about this coming prosperity is that its not going to be like days gone by where prosperity meant living fat, dumb and happy until you die (no offense to anyone in particular there :-), it just means people will have money. Having money certainly does not mean being happy. Look at all the rock stars who have sexed and money'd themselves into a drug overdose for evidence of that.

The Lord is going to give this world what it wants. They love lies and deception, so thats what they are going to get...in spades. They rejected Him in favor of the world, so He will give them the world and not let them enjoy it, in fact, it will kill them. It won't be the first time, consider this:

Psalm 78:16
He brought streams also out of the rock, and caused waters to run down like rivers.
17 And they sinned yet more against him by provoking the most High in the wilderness.
18 And they tempted God in their heart by asking meat for their lust.
19 Yea, they spake against God; they said, Can God furnish a table in the wilderness?
20 Behold, he smote the rock, that the waters gushed out, and the streams overflowed; can he give bread also? can he provide flesh for his people?
21 Therefore the LORD heard this, and was wroth: so a fire was kindled against Jacob, and anger also came up against Israel;
22 Because they believed not in God, and trusted not in his salvation:
23 Though he had commanded the clouds from above, and opened the doors of heaven,
24 And had rained down manna upon them to eat, and had given them of the corn of heaven.
25 Man did eat angels' food: he sent them meat to the full.
26 He caused an east wind to blow in the heaven: and by his power he brought in the south wind.
27 He rained flesh also upon them as dust, and feathered fowls like as the sand of the sea:
28 And he let it fall in the midst of their camp, round about their habitations.
29 So they did eat, and were well filled: for he gave them their own desire;
30 They were not estranged from their lust. But while their meat was yet in their mouths,
31 The wrath of God came upon them, and slew the fattest of them, and smote down the chosen men of Israel.
32 For all this they sinned still, and believed not for his wondrous works.
33 Therefore their days did he consume in vanity, and their years in trouble.
34 When he slew them, then they sought him: and they returned and enquired early after God.

I don't know when exactly this prosperity is coming, I've made a best guess in the chart attached. The Lord has given me zero to work with as far as timing goes. Another question I have is: if we will escape before the 'coming prosperity' why tell me about it? What does it mean? What angle should we take on it?
I will be at the Lord's feet persistently about this, along with further insight into what's to come. grace and peace